Rebecca Kamen: A Curious Life
This film, by Shawn Kornhauser, explores the significance of curiosity and collaboration in the development of Kamen’s career as an artist. 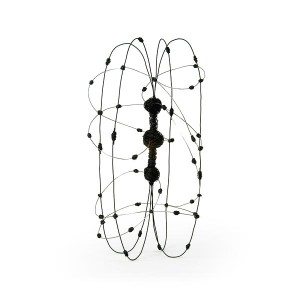 Who’s Who in American Art

Henseler, Christine: “Humanizing Science: Rebecca Kamen Awakens Scientific Discovery Through the Arts and Humanities”, an interview by Christine Henseler with Rebecca Kamen for the HuffingtonPost.com, September 30, 2017.

Devine, Erin: “At Brentwood Arts Exchange, a New Exhibition Stretches the Limits of Drawing As a Medium” in the Washington City Paper, February 27, 2017.

Jenkins, Mark: “In the galleries: Remapping the boundaries of drawing” in The Washington Post, March 3, 2017.

Schoening, Elise: “Dyslexic Artist Shares Her Work and Wisdom” in The Signal, the College of New Jersey student newspaper, March 29, 2016.

Jenkins, Mark: “In the galleries: The roots of these gardens run deep” in The Washington Post, February 4, 2016.

Welzenbach, Michael: Galleries: The Intimate and the Industrial, The Washington Times, Washington, DC, October 16, 1986 p. 2B

Links to Art/Science Articles and Videos

Erasing The Stigma, Episode 11
Click the video, below, to watch Julia de Montagnac’s interview with Rebecca in Episode 11 of the Erasing The Stigma series on the Coloring Confidence website. Julia created the website as part of her mission to help improve the self-esteem of elementary school students with dyslexia. After watching her interview with Rebecca, click here to see the entire collection of Julia’s interviews at the Coloring Confidence website.

Podcast: Talking in the Library Podcast discussing the PLOT Project,
The Library Company, Philadelphia, 2019 (click below to listen)

Remembering the past while looking forward
Penn Today, the online news publication for the University of Pennsylvania, published this article by Erica K. Brockmeier on July 17, 2019 to highlight the participation of Penn’s community with the Apollo missions. The article explores Rebecca Kamen’s thoughts, as their artist-in-residence for the Department of Physics and Astronomy, regarding art and science as it relates to the Apollo 11 program and her work for the PLOT project.
Click this to view the entire article at the Penn Today website.

The Periodic Table: Interpreting a Cultural Icon
In her website Mirror Gaze, Lee West writes about the languages of art and science and explores an area of intersection: the Periodic Table. The author interviewed Rebecca at the time of her Periodic Table presentation at Science History Institute in May of 2019. That lecture and Rebecca’s Divining Nature: An Elemental Garden installation provided inspiration for West’s essay published in June of 2019.

Creators – Rebecca Kamen by Alice Fleerackers is an interview with Rebecca published June 13, 2019 in the Art the Science blog, a Canadian Science-Art nonprofit organization.

SciArt Website Member Interview recognizing Rebecca as the SciArt ‘Member of the Month’ for January, 2018. 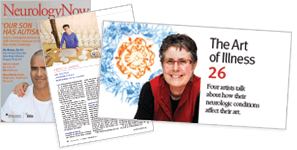 The August/September 2017 issue of Neurology Now includes Rebecca Kamen in the article “The Art of illness: Four artists talk about how their neurologic conditions affect their art” by Lisa Collier Cool. The article shares the story from four artists who have experienced neurologic health challenges that have influenced their art. In the article Rebecca shares her experience learning about the work of Nobel Laureate Santiago Ramon y Cajal through neuroscientists at the NIH and how that changed her life.
Click here to view the article at the NeurologyNow.com website and then click this to download the article as a PDF.

Rebecca interviewed by curator Angela McQuillan for the May 19, 2017 Esther Kline Gallery Podcast in Philadelphia, PA: 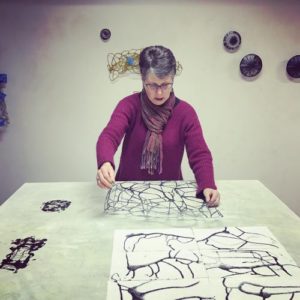 Click this to listen to Rebecca Kamen in a podcast interview by Nikki Brugnoli recorded in February, 2017. The interview was recorded in Rebecca’s McLean, Virginia studio as part of her participation in the “Drawn Out Drawn Over” Exhibition at the Brentwood Arts Exchange, Brentwood, MD.

STEM Brought to Beautiful Life in the Bullis School online newsletter:
In early December, 2016, Rebecca Kamen completed a residency Bullis School in Potomac, Maryland where she guided biology students in creating their own art based on concepts from their studies in biology. Her residency was provided by a grant from the Bullis Parents Association and involved 11th grade biology students along with their faculty. Click this to read the entire article and then click here to see their online gallery of the event. 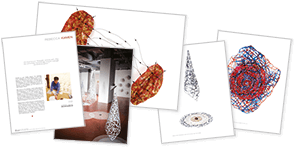 Issue #1 of E-Squared Magazine showcases Rebecca’s work along with an article about  her exploration into various topics of science and how that inspires her art. This appears in the debut issue of E-Squared, a quarterly print publication with the mission to present works of both art and science and combinations of the two. The article about Rebecca’s work explains how her abstract interpretations of matter and space help demystify the complexity of science. Click this to see a PDF of Rebecca’s work in the Autumn issue of E-Squared and then visit the E-Squared Magazine website: http://www.esquaredmagazine.com/issue-1/

The December 2015 issue of SciArt in America magazine includes an interview with Rebecca Kamen in their “Straight Talk” section. The article examines how Rebecca’s work is inspired and informed by the worlds of neuroscience, cosmology, astronomy, chemistry and many others. SciArt asks about Rebecca’s collaborative process with her most recent NeuroCantos project in which sound, video and poetry became components. Much of Rebecca’s art is included in the pages of the December issue. Click this to visit the article at the SciArt website or click here to view a PDF of the interview with Rebecca.

The August 2015 issue of The Analytical Scientist includes a cover story about Rebecca and her art. The topic “When Art Meets Science” is the focus of this issue in which they publish the interview “The Invisible Becomes Visible” with Rebecca. The interview explores Rebecca’s fascination and inspiration from the world of science. The Analytical Scientist includes quotes about Rebecca from Marjorie Gapp, the curator of Art and Images at the Chemical Heritage Foundation. Click this to see the entire article at the Analytical Scientist website or click here to open a PDF of the pages that include Rebecca’s work (915k PDF document).

“Putting the A in STEAM” at NYTimes.com:
The New York Times showcased Rebecca’s installation “Divining Nature: An Elemental Garden” in their July 25, 2014 article “Putting the A in STEAM” by Susan Hodara. The article quotes Rebecca and includes images of the Divining Nature installation. Click here to see the entire article that includes Rebecca’s work.

“Rebecca Kamen Discoveries Between Art and Science” at 3dotMag.com:
http://3dotmag.com/rebecca-kamen-discoveries-between-art-and-science/
Click to see the full video interview on YouTube.

Making the Invisible, Visible: Discoveries Between Art & Science at TEDxGeorgeMasonU

Books as Catalyst: Discoveries Between Art and Science

Healing with Art: A Cincinnati Children’s Project by Litsa Spanos and published in her blog at the ADC Fine Art website:
http://adcfineart.com/healing-with-art-a-cincinnati-childrens-hospital-project/

Radio interview with Canadian Public Radio recorded during Rebecca’s artist residency in the Science Program at the University of Manitoba, Winnipeg, Canada.